My Digital Badge: The case for XSplit Broadcaster as UDL enabler

Oliver Whelton is an Autism Specialist Learning Support Tutor at University College Cork Disability Support Service having fulfilled a variety of roles since 2007. He also teaches in the field of Disability Studies in the areas of education and employment and facilitating inclusion to adult learners at UCC.

Other areas of research interest and study include technology and software and its potential to liberate and constrain for both educators and students and the growing movement towards a more inclusive learning environment at third level as evidenced by ongoing post-graduate studies in Diploma in Teaching & Learning and assorted disability related courses.

With the unprecedented increase in online teaching in Ireland since March 2020 due to Covid-19 and the government-mandated closure of higher education campuses, many courses have had to move toward online platforms. This move is one that can have both positive and negative impacts in terms of replicating the natural classroom environment, more traditionally oriented towards a combination of face-to-face teaching, video, demonstration and a level of in-person interaction that provides for more engaged learning.  To reflect upon the moves I personally encountered as an educator in the field of Disability and Autism Studies and my work as a Learning Support Worker during this time, I commenced a Digital Badge journey facilitated by AHEAD’s Digital Badge in Universal Design for Learning (AHEAD, 2020). This paper documents that journey and the lessons learned by this student of online teaching.

In a quest to adhere to Universal Design for Learning (UDL), it is essential to pre-empt the use of video in lectures by scaffolding the response required of students as an in-class task. The isolation of the online environment and disconnect felt by some students, the difficulty of working in groups (unless established in online breakout rooms), and the challenge for teaching staff of verifying the level of student engagement means that, in order to provide a solid basis or model for a class-based exercise, it is useful to record and lead students via the use of a demonstration video. To this purpose, I dedicated myself to finding a new means of recording on a multimedia basis on-screen.

Panopto is a popular and often preferred recording software for asynchronous lectures with its post-lecture editing tool. But while it is strong in terms of post-production editing, it can lack a competitive edge when one wishes to switch from input to input, without undue plodding, in the resultant recording. MS Teams’ own recording option of MS Stream conversely leaves the lecturer with limited ability to edit post-recording.

Added to this the fact that recording synchronous or live lectures using MS Teams serves to capture student names and cameras rather than the lecture slides themselves; this means that watching back later delivers more as a record of attendance rather than a content driven, academic resource – a who’s who, rather than a what’s what. Panopto also has difficulties in terms of permitting selection of a reduced recording space or pane, so it is a blunt instrument and does not readily allow itself to be split-screened.

For the purpose of pre-recording, full lectures, demonstration videos or potentially streaming to YouTube, a software called XSplit Broadcaster is a good example of a software that permits some of the aforementioned limitations to be addressed. With Panopto, switching between sources (e.g. video, PowerPoint and webpages) is often stilted and requires multiple pause points, switching screen, toggling of the on-off microphone and a very large amount of post-recording editing. XSplit reduces a large amount of these difficulties by creating what are known as ‘scenes’.

‘Scenes’ are akin to a TV studio where inputs are pre-loaded and pre-cued at determined points and provide resources between which the person recording can switch effortlessly. One can split the screen between multiple inputs (e.g. video, webpage, onscreen webcam and word processing document/chat screen) to input comments or text information, while the video is in progress. All video inputs can be cued at different start points and endpoints to autoplay as you switch between the scenes. 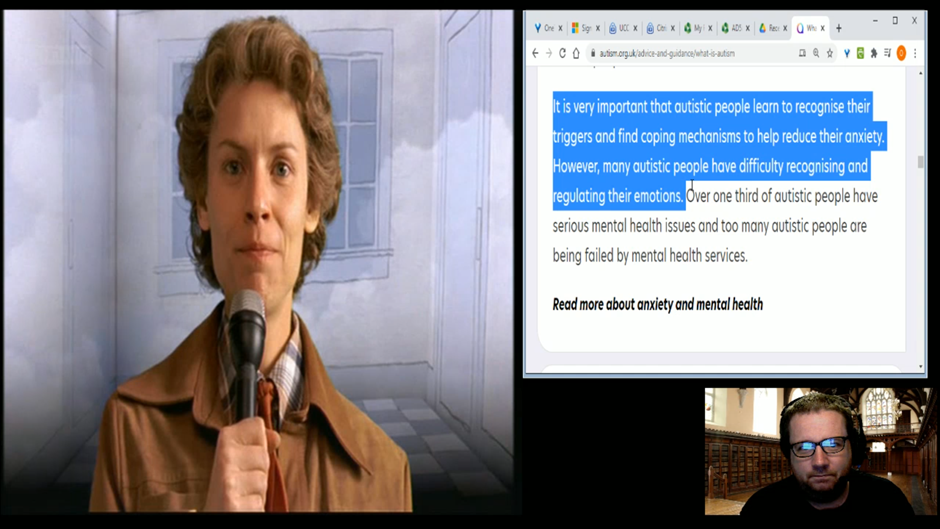 In this way, the lecturer can supplement their commentary through occasional voiceover during pauses or muting of video audio, add and highlight sentences within webpages and zoom/scroll and control these via the XSplit Broadcaster interface without having to be present and locked onto the internet browser offscreen (if preferred). PowerPoint can also be adjusted to share the screen with other inputs by opting for Browsed by an individual (window) under its Set-Up Slideshow function.

These different inputs can be sized and scaled, according to the person’s wants and needs under the layout tab. Once these are set they can be locked into position according to preference and saved so that one can resume at any time. This makes it very user-friendly regardless of Windows and Software start-up. 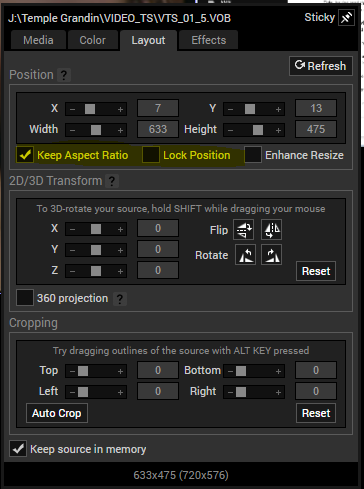 The result is a far more slick, nuanced video recording of a partial, full lecture or demonstration which can be instructional and hit many of the crucial points of Universal Design for Learning (UDL) by providing multiple means of engagement and entry points to the material. As an added plus, Panopto takes the resultant XSplit created video recording and its embedded headings and autogenerates the Contents list as it would with a video recorded directly by it.

The Digital Badge and XSplit’s Functions

As a participant on the Digital Badge for Universal Design for Learning journey, we were tasked with altering an element(s) of our teaching to make it more inclusive and to fit as many of the principles of UDL as possible. For my task, I decided to use XSplit to record a teaching task - demonstrating on-screen with a 5-minute segment of Temple Grandin (2010), while splitting the rest of the recording pane or screen to show a webpage from the National Autistic Society (2020), entitled What is Autism? as a means of drawing students’ attention to the characteristics of autism, as explained within the webpage. This served to prime students for increased engagement with the full film, akin to the way in which I demonstrated or modelled in the pre-recorded video. Another notable feature is the ability to open YouTube videos and control, pause and scroll directly.

As a means of recording demonstration videos and full asynchronous lectures, this software not only makes asynchronous lectures and demonstration recording far more interactive, enables less text-heavy and stimulating on-screen content but also hits many of the UDL principles of scaffolding, integration of video and live webpage content, as well as the ability to broadcast to YouTube, Twitter & Player.me. The recording quality of XSplit Broadcaster to my mind is superior to that of Panopto. It is cleaner and sharper and, even at Panopto’s maximum settings while XSplit can be customised to generate a smaller file size when recording.

At the time of writing, I have yet to find a means for transmitting the audio being heard within XSplit to MS Teams though it does replicate the visual layout in its entirety with the split-screen shown so perhaps it is a puzzle to which I have the pieces but have yet to solve.  Watch this space or scene…!