Oliver Whelton is an Autism Specialist Learning Support Tutor at University College Cork Disability Support Service having fulfilled a variety of roles since 2007. He also teaches in the field of Disability Studies in the areas of education and employment and facilitating inclusion to adult learners at UCC.

Other areas of research interest and study include technology and software and its potential to liberate and constrain for both educators and students and the growing movement towards a more inclusive learning environment at third level as evidenced by ongoing post-graduate studies in Diploma in Teaching & Learning and assorted disability related courses.

The growth of Voice-to-Text technologies and improvements in their accuracy in recent decades has significantly supported students and instructors in the conversion of ideas and thought into the printed word. Most recently, Google have launched a new app Live Transcribe which builds on the success of the Voice Typing feature of Google Docs, available via Google Drive.

Live Transcribe is an accessibility app designed for the deaf and hard of hearing, and usable by anyone. Using Google's state-of-the-art automatic speech recognition technology, Live Transcribe performs real-time transcription of speech and sound to text on your screen, so that you can more easily participate in conversations going on in the world around you. You can also keep the conversation going by typing your response on the screen (Google Play).

As well as those mentioned above, there are many categories of users who can benefit from this technology and this forms the impetus for this article. (Note: ‘Instructor’ here denotes Lecturer or Learning Support person/Tutor.)

There are several scenarios in which this app can be beneficial; both public settings or in the educational realm, for a group of or single students.

In day-to-day meetings or interactions, either scheduled or impromptu, or in educational sessions where a student has difficulty processing information delivered verbally, verbally delivered information can now be simultaneously output and processed textually.  In an educational setting specifically, this is very beneficial for a student in the category of Deaf/hard of hearing who is without the support of a Sign Language Interpreter, whereas outside of the educational setting and in their daily life, using Live Transcribe on their phones, potential users could engage more confidently with customer services and other members of the public who do not have a sufficient level of Sign Language to communicate effectively. Here, users could independently access answers to questions in a text format with which they will more readily be able to engage. Similarly, those who have a heightened difficulty with both processing information and maintaining eye contact could benefit from this technology, as well as those who are hard of hearing/deaf and for whom the app was originally designed.

The ubiquitous nature of smartphones could, in this situation, open a two-way conversation by those of all abilities where they can communicate simply by placing the phone in close proximity when speaking. For added accuracy in a noisy setting, it might be necessary to add a small microphone/ Bluetooth-enabled device to the device hosting Live Transcribe; these are available for a small outlay from many online retailers. Live Transcribe has advanced to identify and indicate on-screen the nature of background sounds also.

In educational settings specifically, benefits which can accrue from the use of a smart device hosting Live Transcribe are evident in the classroom.  In fact, Google themselves acknowledge the contribution of Gallaudet University, Washington DC, a private university for the education of Deaf/ hard of hearing students, to the development of this app, illustrating its origins in an education setting.  The growth in the use of Chromebooks as an alternative to a Windows PC/Mac, via the use of a virtual desktop (to a PC), enables the simultaneous display of Google apps such as Live Transcribe and Microsoft products (i.e. PowerPoint) once a ratio is established between the two onscreen for projection. This is achieved in the Setup Slide Show layout by changing to ‘Browsed by an individual screen’; this allows for resizing in Slide Show mode on the projected screen. 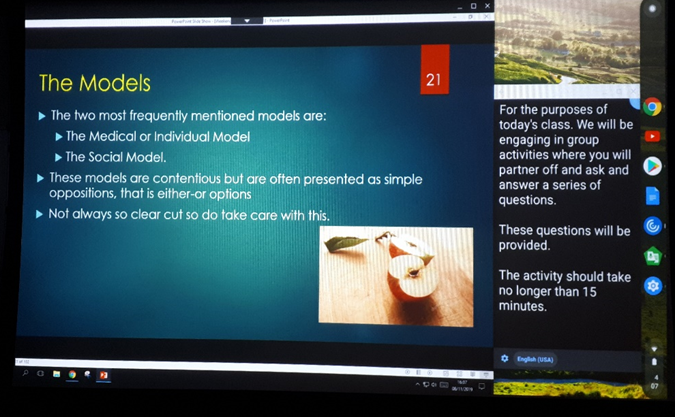 Figure 1: Chromecast on a projection screen with split view between PowerPoint & Live Transcribe

In the absence of a Chromebook and in a predominantly PC/Mac learning environment, the instructor could open Live Transcribe on a smart device (such as a smartphone) and stream the device’s screen to a projected screen displaying lecture slides on PowerPoint, or other documents/materials. Third party software/ products such as TeamViewer, Mirroring 360 or others will then stream to the PC/Mac which is presenting on the projector/display using the native computer in the learning environment. As with the previous Chromebook example, it simply requires a ratio of onscreen space for the streaming software to display Live Transcribe so that the Instructor’s speech is converted instantaneously into text on-screen during lectures, tutorials or meetings. Such a small innovation would indeed be inclusive teaching and benefit all students in the room, whether they be Deaf, hard of hearing or hearing. 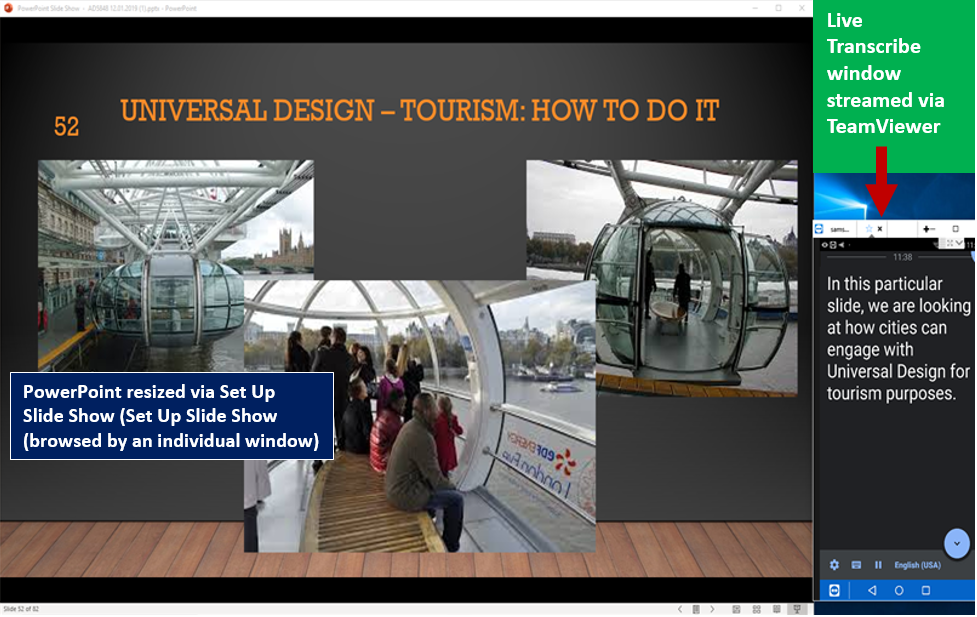 Similarly, the benefits of the use of Live Transcribe projecting via either a Chromebook/tablet or PC projection from a portable smart device (as in fig. 2 above) in a team-teaching environment would combat the difficulties of lip-reading when instructors in the room are physically distant from each other and from the individual student. An instructor working on a solo basis who engages with teaching practices and styles that necessitate movement to facilitate student engagement can sometimes disable categories of students and make teaching more difficult. Adding a microphone or Bluetooth-enabled device to a smartphone for added clarity makes Live Transcribe an enabler for the modern lecture experience.

If the instructor wishes to directly assist only specific students within a class setting, using Live Transcribe voice-to-text via a ‘Streamed Team Meeting’ (Team Viewer or similar) or in the case of Mirroring 360 for up to four devices, enables the instructor to communicate solely to those students’ devices (personal laptops or smartphones).  Similarly, on a one-to-one educational basis, both instructors and students benefit as the instructor could communicate more effectively with text and speech simultaneously for better understanding. A student who is not comfortable, or unable, to speak for the purposes of Live Transcribe can reply without speaking by typing responses within the app which allows for a split screen to appear on the host device.

The Live Transcribe app itself is free and will hopefully remain so and, while there may be concerns over GDPR for sensitive conversations being converted via voice-to-text, the uses of such an app for either classroom settings or short conversations in public settings which do not contain sensitive information are overwhelmingly positive.

Live Transcribe as a means of communication can have a tremendous effect on one to one communication and group/individual teaching settings. The application to a diverse student population is vast and could have a wonderful impact on the learning experience at all levels of education.