Alan Hurst was Professor of Education at the University of Central Lancashire. He has published books and articles, lectured and led workshops throughout the UK and in many countries overseas, been a member of several significant and influential policy groups, chaired consultative groups for a number of research studies and projects, and been the recipient of a number of awards for his work on the creation of inclusive education for disabled students in universities. He was also a member and subsequently a trustee of Skill: National Bureau for Students with Disabilities until its closure in 2011. He continues to be a member of the Editorial Boards of the journal ‘Disability and Society’ and is a free-lance consultant contributing to conferences and staff development programmes in a number of institutions. 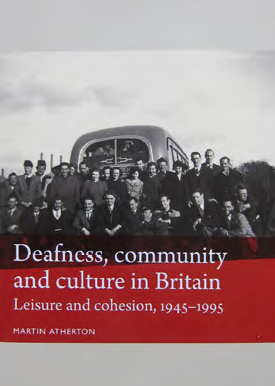 The focus of this book is on the role of deaf clubs, especially those in North- West England, in creating, sustaining and promoting notions of a shared community and a shared culture among deaf people.

The main source of information is the newspaper British Deaf News (BDN) and the events reported between 1945 and 1995. The introduction to the book is easy to read and provides a useful summary of the book, and outlines its organisation into eight chapters and their content. It is here that readers encounter for the first time the important concept of topophilia which underpins much of what follows. The term refers to feelings of love and affection that are felt for particular places and the folk who are associated with them. It is here too that the author mentions the decline of deaf clubs since 1995, a point repeated later in the book. The decline is linked to the development of more instant communication modes such as texts, emails and SMS messages which obviate the need for deaf people to have face-to-face communication. There is also the lack of interest amongst young deaf people.

An additional important discussion concerns the use of D/d in relation to those who are the focus of the book. Atherton explains the origins of the usage, noting especially that use of Deaf has tended to act in an exclusionary way to embrace only those born prelingually deaf and use sign language as their method of communication. He outlines the reason for his preference for the term ‘deaf’ which he then uses throughout the remainder of the book because he wants his writing to be much more inclusive in terms of who can be considered to be part of the culture and community.

The next few chapters discuss some important fundamental issues. Chapter Two, for example, considers whether deafness is a disability and the dilemmas faced by deaf people who do need to regard themselves as disabled if they are to access additional funding to pay for interpreters etc. The Disabled Students Allowances in the UK are an example of this and relevant to the work of staff in disability services. The place of sign language in this is acknowledged in the following way: ‘The non-recognition of British Sign Language(BSL) as a native language of Britain, coupled with the continuing dominance of medical perceptions of deafness, is at the heart of the deafness as disability debate for many deaf people’(p.17) (In relation to this point, one must note that BSL is recognised now as an official language in the UK.)

With regard to leisure and sport, deafness has not proved to be a major barrier although it is interesting to read of the relationships of the national organisations of deaf sport with the paralympic movement. Another important matter covered is the attitude to the participation of hearing people in deaf clubs and their activities (e.g. the families and friends of deaf people). The author points out that the growth of courses in Deaf Studies and in sign language in colleges and universities has meant that many more hearing people have become involved in deaf clubs. There is also a converse effect - with the increase in the numbers of hearing people who have some competence in using sign language, deaf people find less need to go to segregated activities like those provided by deaf clubs.

Chapter Three describes the historical development of deaf clubs from their origins in Victorian social reform to their decline at the end of the twentieth century. It was fascinating to read about and reflect upon several of the points raised – for example the effects of having different interest groups such as the Royal National Institute for Deaf People and the British Deaf Association, whilst a more recent concern is the membership of deaf people from ethnic minority communities in deaf clubs.

Chapter Four provides a similar historical outline of leisure and sporting activities and their contribution to the development of a deaf community and a deaf culture. The history of the ‘British Deaf News’ is covered in Chapter Five and the justification for its use as a key source. The newspaper depended on contributions from deaf clubs and deaf people themselves rather than making use of staff reporters.

Atherton states that this is a powerful argument for using the content as a true reflection of the major interests and concerns of deaf people. Given its national coverage, it means too that the deaf community can be defined more broadly than those involved with local deaf clubs. Based on his analysis, the two themes which are recorded throughout the period he examines are leisure activities and sport. This leads smoothly into the focus on these two topics in Chapter Six in which he reveals that based on the BDN, there were 242 deaf clubs existing during the fifty year period. The types of leisure activities were no different from those undertaken by hearing people and can be classified under eleven headings. However, many club activities involved visits for social activities to other deaf clubs locally, regionally, nationally and internationally.

With regard to sport, England created an overall national body for deaf sports in 1930 some twenty years after one had been established in Germany. In England the major sports were football in winter and bowls in summer. Importantly, these were often in leagues involving hearing teams thus enabling deaf people to demonstrate their prowess and skills irrespective of having an impairment. However, the overall range of sports featured in the newspaper was restricted to just eleven different ones.

Chapters Seven and Eight explore the general concerns outlined already but in the specific geographical context of the north-west of England, the area outside London that had the greatest number of deaf clubs (28).

The second of these two chapters, the longest in the book, includes some very interesting specific examples of leisure activities and sports. In this region, 24% of activities involved trips and holidays, 16% parties and dances, and 15% fund-raising. Individual illustrative examples provide interest and depth to these bare statistics. As for sports, 18% were each spent on football and bowls whilst 26% were spent playing snooker/billiards/pool.

The closing chapter begins by looking at the future of deaf clubs and their lack of appeal for young deaf people. Atherton suggests that one reason for this is the decline of segregated school education and the shift to including deaf pupils in mainstream schools. This is also important for the lack of continuity which used to be found between segregated special schools and local deaf clubs. Additionally, there has been greater acceptance of sign language in society. The latter contributes also to strengthening the challenge to seeing deafness as difference rather than disability. Many years ago, Michael Oliver said that disabled people are prevented by their disability from engaging in ‘normal’ or ‘ordinary’ activities. Atherton’s response to this is that ‘As for being disabled through an inability to do ordinary things, the evidence of deaf people’s leisure activity contradicts this entirely.’(p.169)

It should be clear from my summary that this book is not crucial to the work of staff in disability services in post-school education. However, I do consider it to be something that colleagues would benefit from reading and then reflecting on a range of implications for their roles and responsibilities. For me, it is an example of the desirability of moving away from being ‘trained’ about disability to becoming ‘educated’ and taking the position of being a wellinformed, widely-read professional. Agreed, the book does not address directly the day-to-day concerns of disability services, but it should make colleagues think about some basic issues, most notably the treatment of deaf people as disabled. What’s more, this acquisition of new knowledge can be achieved in an interesting and enjoyable way through reading this book.

Despite my considerable positive feelings for the book, I have some points of concern. Some of these can be attributed to the publisher in terms of the small type-font size used for the text and the high cost of the book - the latter I am sure will act as a deterrent to potential readers. I recognise that the target market might be small and specialist but I wonder if some cost-cutting might have been achieved by publishing it as a paperback for instance.

The matters which relate to the author are fourfold. First, in terms of deaf clubs, the development of culture and its theoretical underpinning, I was surprised to find no mention of the Marxian idea of the development of ‘class consciousness’ and the change from being a ‘class in itself’ to a ‘class for itself’. At the theoretical level, links could have been made too to the work of Alfred Schutz and the ‘taken-for-granted’ in exploring social attitudes to deaf people.

Secondly, again relating to theoretical underpinning, I found the concept of topophilia fascinating. There is a promise to return to this in the conclusion which I looked forward to reading and indeed on page 160, there is some discussion but with no specific mention of the concept by name (and despite it being listed as such in the index).

Thirdly, I would have liked more illustrations. On pages 78 and 79, two very differently-focused front covers of the BDN are reproduced demonstrating the move away from domesticity to a more political stance – what a shame there is not more of this at regular intervals. One or two personal stories would have been really welcome.

Finally, I was a little surprised by the number of typographical errors which seem to have escaped the eyes of the proof-reader – there are three on pages 36 -37 for example.

It would be wrong and unfair to end this review with a short paragraph about a number of shortcomings. I want to be clear. These were a minor irritant and did not detract from my overall favourable impression and enjoyment. I can recommend the book in the strongest and most enthusiastic of terms. I hope that my comments do encourage the readers of this journal to get a copy and enjoy reading it as much as I did.